With less than a week to go before the opening round of the new Courier Connections Renault Clio Cup season, our friends over at The Checkered Flag have been looking at a preview of the seasons drivers and teams.

While there may be a new car this year, there’s a number of familiar faces coming back to drive them, including six race-winners from 2013 who will be aiming to make history as the first champion of the new generation.

Hoping to capitalise on all their experience for a title push are two third-year Clio competitors, team newcomers Mike Bushell and Rob Smith. Bushell joins the team after a mixed 2013, in which he took three podium finishes whilst changing teams twice, while Smith is hoping for an upturn in fortunes after taking just a single top six finish last time out.

Experienced Clio campaigner James Colburn meanwhile is back for his sixth successive campaign in the series with Westbourne Motorsport. After winning on the first and last weekends of 2013, he’s aiming for more regular successes and a first title challenge since 2011 this time out.

The season commences at Brands Hatch this weekend, 29/30 March, with pre-event testing on Friday following by the first qualifying session of the season on Saturday at 11:20. Round One will follow later in the day at 16:25 with Round Two to be televised live on ITV4 on Sunday at 15:30.

The series will follow the British Touring Car Championship for all ten rounds this year, the first time since 2010 it will run over twenty rounds, returning to Brands Hatch for its final rounds in October. 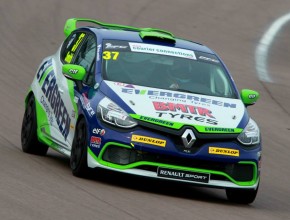 Organisers of the Renault UK Clio Cup, the British Automobile Racing Club, are delighted to announce a new headline sponsorship deal with Scottish haulage and distribution business Courier Connections, a tie-up which will also provide the 2014 title winner with a unique champion’s prize.

As well as winning the Renault 5 GT Turbo and, of course, the coveted champion’s trophy, the 2014 Renault UK Clio Cup title winner will also enjoy the use of a Clio Renaultsport 200 Turbo EDC roadcar for 12 months.

“Welcoming Courier Connections onboard as the headline sponsor for the Renault UK Clio Cup is fantastic news for the championship, competitors and teams”, said Jeremy Townsend, Renault UK Communications Director, “We are delighted to be working with Martin McGeough and his company, especially at the start of the new era for the fourth generation Clio.

“This is a very important anniversary year for Renaultsport UK, marking 40 years since the first ever Renault 5 race in Britain is a real landmark and we’re thrilled to be able to acknowledge that with the wonderful Renault 5 GT Turbo prize which Martin has very generously put forward. Our thanks also go to Vic Covey Jnr [former Renault UK Clio Cup racer] for brokering the sponsorship deal.”

Based in Bellshill, Lanarkshire, Courier Connections provides the full range of road transportation, from vans to 44 tonne HGVs, with services including large-scale palletised freight distribution and refrigerated connections. 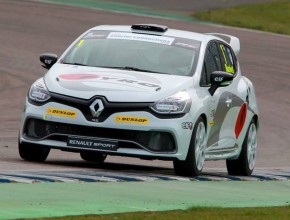 Speaking on the sponsorship agreement, Martin McGeough said: “Becoming headline sponsor of such a prestigious, high profile and well known motor racing championship as the Renault UK Clio Cup is a fantastic development for Courier Connections. As a huge motorsport fan and trackday enthusiast myself, I am delighted to be associated with the category.

“Everyone at Courier Connections is looking forward to the first season featuring the new Clio, becoming championship sponsor in the company’s 20th anniversary year and the 40th anniversary year of Renault UK motorsport is a perfect fit. The prize of a Renault 5 GT Turbo for the champion is a neat twist, I’m sure the eventual winner will thoroughly enjoy owning this Renault classic!”